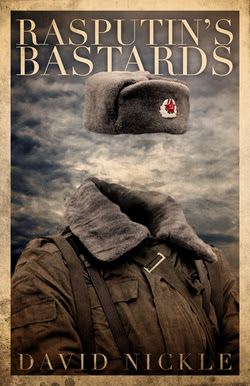 Rasputin's Bastards by David Nickle is first and foremost a spy novel; and reader take note, this is a book that expects its reader to be a clever as the spies whom the story revolves around.

David Nickle describes an intricate plot with a baker's dozen of multifaceted characters, and it's a challenge to keep up with each individual and their separate motivations – in some cases, the characters themselves are not self-aware enough to understand their circumstances, and circumstances are subject to change. The reader must contend with the real world and juggle complicated metaphysical ideas involved behind the “sleeper” agents who, to reduce the idea to its basic concept, are “possessing” the bodies of other characters to carry out their goals. Add to the mix a gathering of psychic children and a telepathic infant and the complexity of Rasputin's Bastards multiplies.

The writing is good but this isn't a place for the beach-read pulp fiction crowd, and having an understanding of past spy novels (The Marathon Man by William Goldman comes to mind) is essential to appreciate what David Nickle is building, and the style he chooses to do it in.
A reader will either love it or hate it; one must keep note of the characters and their subplots while tracking the greater plot unfolding and it's not an easy job to jack-hop from one character's psychological state to another. Nickle gives nothing away to the reader for free, which lends the benefit of surprise when characters end up in unexpected places and are revealed to be different people than they started out as.

All in all, this is a read more suited to specific audience who has an interest in the genre of spy thrillers, with a dash of the supernatural.

buy it directly from Chizine.

Look for Martin Rose's work in the anthologies Fear of the Dark from Horror Bound publications and Art From Art from Modernist Press. More details are available here.

Posted by Shroud Magazine at 9:58 AM No comments: 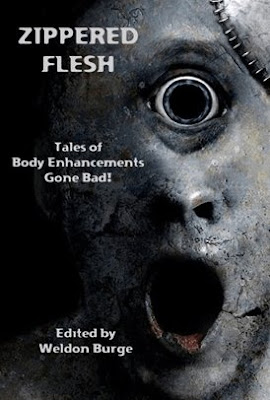 Zippered Flesh is an anthology of twenty tales of body enhancements gone wrong—and not “gone wrong” like Joan Rivers or Sly Stallone—we’re talking a birthday party in the cemetery degree of “gone wrong.”

The real standouts of the collection were the following:

"Comfort" by Charles Colyott – We are endlessly both fascinated and repulsed by morbid obesity, and this story is one of the best in the book. Deftly written, we find a son trying to care for his huge mother on his own and will not hear of putting her into a home—shades of Gilbert Grape. This jeopardizes both his marriage and his job, but a mama’s boy is a mama’s boy. The ending packs a punch that you’ll be thinking about hours later.

"The Shaping" by Scott Nicholson – My favorite of the entire collection, this story gives teeth to the idea that great artists and writers pour their blood, sweat and tears into their work in order to be creatively effective. This story is a little bit Logan’s Run,” a little bit “X-Factor” and a whole lot of shock at the way competition within the arts is addressed. If you’re a creative individual, you’ll understand; but even if you’re not, you’ll enjoy the insight.

"Something Borrowed" by J. Gregory Smith – A story of abduction, surgery and a conscience grown just a little too late.

"Sex Object" by Graham Masterton – This would have been a better story to open the anthology with, as horrifying as it is. It’s about a trophy wife taking steps to ensure that her easily bored husband will not throw her over for a newer model. You’ll have nightmares about this one, but little sympathy for any of the characters.

"Locks of Loathe" by Jezzy Wolfe – In opting for an illegal correction of lifelong alopecia, a woman learns that there are some scary consequences to taking things that do not belong to you. Wonderful story.

"Hearing Mildred" by Weldon Burge – I enjoyed this story because it’s the only one in the anthology with a dark sense of humor. An aging gentleman has recently lost his wife. He has small desires as to how to spend the balance of it—all he wants to do is watch television, and now he can do it without having to deal with an endless “Honey Do” list. But when his hearing aids start acting up, he discovers that silence really is golden and hearing is not all it’s cracked up to be.

That’s it. Only six standouts—in an anthology of twenty. There were other tales that were enjoyable to read but didn’t stay with me after I’d read them, and a few that the anthology could have done without entirely.

That being said, this is a first book release from this new press, Smart Rhino and there will inevitably be growing pains, which will include missed typos, commas, and that sort of thing. This is forgivable as long as it is not rampant—and it’s not.

What I have a harder time with is writers who are lazy about fact checking. One notable example in one of the stories is a pirate, at sea, referring to lines as “ropes.” “Rope” is a landlubber term. This may seem like a small thing, but to the many readers who have spent time on the ocean, it is a glaring error.

Carson Buckingham is a writer living in the great American Southwest and she reviews horror/paranormal suspense novels. Stop by to view her scriblins.
Posted by Shroud Magazine at 9:39 AM No comments: