Remember Why You Fear Me (Chizine) by Robert Shearman 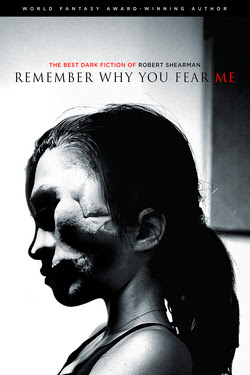 Lions and tigers and bears?  Hell, no!

What’s really interesting about this exemplary collection from Robert Shearman is that most of the stories begin with fairly mundane events.  For example, in “George Clooney’s Mustache,” a woman has been kidnapped, and what appears to be the Stockholm’s Syndrome that follows isn’t quite what it initially appears to be.  This story is probably my favorite in the book.

“Clown Envy” turns bragging about Dad’s occupation on its ear.

“Roadkill” beings with something as run-of-the-mill as a tawdry office dalliance, but picks up a monster along the way.

“Custard Creams” explores the end of a relationship and how the abuser triumphs and continues the cycle of abuse—but in such a horrifying way that the reader has heartfelt sympathy he wouldn’t normally feel for the second victim.

Shearman turns familiar events gradually and deftly upside down by introducing a bizarro twist in each tale; and it’s done so seamlessly that they make complete sense in a crazy sort of way, causing the reader to mutter, “Hey, wait a minute!” after he is taken in by it.  In a few of these stories, Shearman plays a dark joke on us and we fall for it, time after time.

Not that this book is funny, although there are a few stories that are most definitely blackly humorous. Other stories--many, as a matter of fact--are filled with world-weariness and a sort of shuffling sadness that makes his characters seem subtly noble and worthy of our affection—Quixote-esque in many ways, and just “off” enough to be truly creepy.  But Shearman’s work, most of all, is intelligent.  And that’s why it is so effective.   His stories are carefully constructed using a blend of sophistication and gentle wit that will keep readers coming back; and are full to the brim with tightly expressed ideas, attitudes, and feelings without ever being pompous or maudlin.

I could go on and on, but I don’t want to write too much and spoil these stories for anyone.  These are all standouts and you’ll want to read them more than once.  I did, and enjoyed them even better the second time around.

Carson Buckingham is a writer living in the great American Southwest and she reviews horror/paranormal suspense novels. Stop by to view her scriblins.


Posted by Shroud Magazine at 7:33 PM No comments:

The Narrows (Samhain), by Ronald Malfi 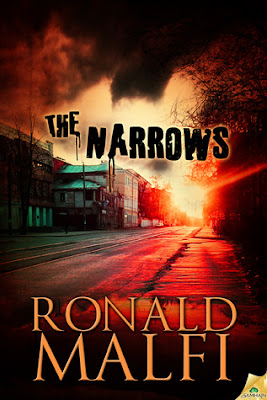 The town of Stillwater, Maryland is a tiny hamlet, surrounded by the Allegheny Mountains, where it gets dark much earlier than anywhere else. Stillwater also has endured a series of devastating floods  and after the most recent one, the early darkness brings company so nasty that even the last few hangers-on in the dying town are forced to question the wisdom of remaining.

This novel is a real page-turner and anyone who has spent time in the small forgotten towns of New England will find Stillwater familiar.  Malfi’s well-crafted prose will make the reader feel, along with the characters, that melancholy vacancy of the soul at the description of the closed shops on Main Street and the alcoholism and abuse that rides on the back of small town poverty.  Those who stay are there only because they have nowhere else to go.

That being said, there’s plenty going on in Stillwater, and none of it good.  Malfi deftly handles the building of suspense and the sense that things are going strange by beginning with town-wide nightmares.   From here he escalates to mutilated livestock, followed by missing children . . . missing children that perhaps the parents and Sheriff Ben Journell should be a little less interested in locating.  His character development is so spot-on that by the end of the book, you feel you know everyone well and what’s more, you actually care about them deeply.  I found myself muttering more than once, “Oh, I didn’t want him to die-- I liked him;”  but this is the best tool the writer has to make the reader dig in even more against whatever threatens his characters, and Malfi uses it well.

There is no grey area where the monster is concerned. It has no redeeming value.  It didn’t become that way because of abuse as a child.  We’re not supposed to understand it.  It is pure, unreasoning, unrelenting evil.  We’re supposed to hate it, and we do.  In this town that has so little, and it seems that the monster has shown up just in time to take what’s left.

The prose is visually stunning—not because the town is beautiful, because it isn’t—it’s Malfi’s words that are.  Such a clear picture is painted with these words that the reader sees the town clearly, warts and all, and knows his way around.  It’s as visually written as a movie script.

Though The Narrows is a dark book, at its center a single candle of hope shines through the desolation—perhaps not brightly, but at least it is lit. It’s the hope we all have within us, no matter how bad things become.  It is what the characters, and the reader, hold onto throughout.

My problems with this book are editorial rather than creative.  Some words are misused, some made up (“ammoniacal” when describing the scent of ammonia), using “busted” rather than “broken” in narrative,  not as a colloquialism), converting a noun to a verb (“avalanching”), and incorrect idiomatic expressions (“nose was running like a sieve” should be “nose was running like a faucet”  Sieves leak, they don’t run).  There were a couple of instances when descriptive passages were far too similarly written, so that when they were required for shock value, they were somewhat dampened because I’d read nearly the same passages forty pages ago.  Tighter editing would have caught and corrected all this.

Editing problems aside, though, the characters will stay with you, and the town will haunt you in this most memorable book.  This was my first Ronald Malfi book, and it will not be my last. He weaves a tale like a Cloisters tapestry. Do yourself a favor and pick up a copy.

Carson Buckingham is a writer living in the great American Southwest and she reviews horror/paranormal suspense novels. Stop by to view her scriblins.
Posted by Shroud Magazine at 8:21 AM No comments:

The Lamplighters (Samhain), by Frazer Lee 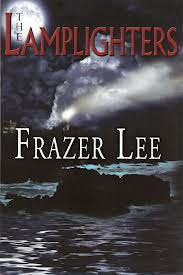 What would you say if, in your hour of greatest need, you were offered a twelve-month job on the secluded tropical island of Meditrine, where your only duties would be to turn lights on and off,  run the appliances, cook, clean, and run the water in a posh mansion to make it looks as if someone were home?  Would you take it?  Would you be a Lamplighter?

Marla Neuborn, her life a complete mess and epic failure, jumped at it, and discovered, once on the island, that there was a downside, too.  For instance, the weird rules:  no smoking, no alcohol, no drugs, no swimming in the ocean, no books, no television, no lying on the beach, no phones or computers, either.  Oh, and she has no idea where the island she’s on is located.  Complete isolation.  Not only that, but the security on the island is run by a draconian paramilitary group and she’s seen a frightening figure on the property at night.  And just who are the owners of all these mansions?  And why are so many animals dying all over the island?  And if no one knows where the island is, that would preclude any random burglaries that the Lamplighters are supposed to be heading off; so what’s with the tight security?

It’s “Gilligan’s Island” meets the Gestapo meets Freddy Kruger.  And wait until you get a load of the Skin Mechanic.  Nightmare city, I promise you.

The Lamplighters is a wonderful first novel by Frazer Lee.  He handles the difficult and subtle building and maintaining of suspense like a pro.  From the day of her arrival, Marla’s intuition begins to tingle about something off about the island, and things slowly, but deliciously, go to hell from there.  She meets a couple of other Lamplighters, as well as Vincent, a most memorable lighthouse keeper; but this is really Marla’s story.  Her growth and transformation as the book spins out is most gratifying.  She begins as a weak-willed substance abuser and ends in a place of strength—always the sign of a well-told story.  I didn’t like Marla initially, but Lee managed to change my mind about her in a deft and nearly seamless way—difficult to do once an opinion about a character is formed.  Again, this addresses Lee’s formidable writing skills.

Lee so well orchestrates the progression to the climax that the end of the book will have you reeling.  In some ways, it seems to come out of nowhere; however, when you look back at the quiet clues sprinkled throughout, you’ll realize that it was the only ending that would make sense, and it was right in front of you all along.  All the loose ends are tied up in a bright, bloody package.

Frazer Lee is an author to watch.  His is a remarkable first novel, and I urge you to pick this one up.  I, for one, can’t wait for his second.

Carson Buckingham is a writer living in the great American Southwest and she reviews horror/paranormal suspense novels. Stop by to view her scriblins.
Posted by Shroud Magazine at 8:06 PM No comments: