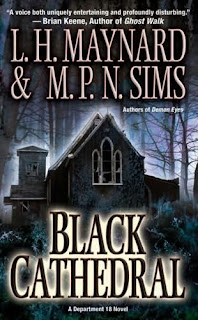 “Black Cathedral” is an exciting adventure in the dark fantastic, a dark and twisted “Mission: Impossible”. With this opening tale, Sims and Maynard have crafted an attention grabber that's exciting and frightening. Like The Dresden Files, Department 18 and Robert Carter are sure to attract a loyal following.

It was like any other assignment: an old English suburban house, haunted by noises, strange smells, and a chilling essence that pimpled the skin – an average job for psychic Robert Carter. However, from the moment he enters the house, he senses something amiss, toys with the idea of calling in backup – and doesn't. He's Robert Carter. He handles these things on his own.

In a flash, the house attacks. His assistant Sian Davies is taken – consumed – and Carter finds himself on suspension for negligence, fuming at his superiors, furious at himself. Lingering beneath the surface, however, is the knowledge that the presence in the house knew him, and even more insidious: had been waiting for him.

Meanwhile, on a remote Scottish island, a horrible tragedy has occurred. A corporate management team sent there for a week's worth of “team-building” exercises has vanished without a trace, and so has the helicopter and pilot sent to retrieve them. Mysterious, hidden corporate powers demand that Department 18 handle the case, and even stranger: they demand Robert Carter be assigned. Not one to bow to demands, administrator Simon Crozier refuses and gives the case to easily his second best, Jane Talbot. When she refuses to take the case without Carter – her former lover and confidant – Crozier has no choice but to reinstate him.

From the start, a dark presence looms over the mission. Upon arriving, the team learns of the island's dark, hidden occult history. Powerful forces are brewing, and somehow they're connected to Carter's recent failure and Sian's abduction. Ugly, dark things rear their heads, and team members are picked off, one by one. A nexus of malevolent energy is forming beneath their feet, ushering in an Ancient Enemy whose day has been long in coming.

“Black Cathedral” is a fast-paced read that has all the right pieces: horror, mystery, adventure, and ancient lore. At times it may move too quickly for some readers, because it doesn't waste much space moving from one scene to the next, and perhaps the ending does wrap up a bit quickly. However, it's an enjoyable, engrossing tale, obsessively readable, and sure to spawn a line of equally entertaining “Department 18” and Robert Carter novels.

Posted by Shroud Magazine at 6:59 AM