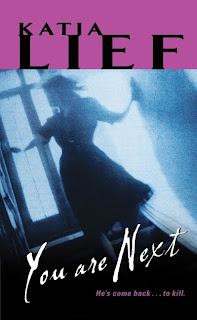 In You Are Next and Next Time You See Me, Katia Lief (aka Katia Spiegelman, aka Kate Pepper) creates a compelling, emotionally driven protagonist and places her into tightly-written, suspenseful situations with plenty of plot twists and revelations to keep the reader guessing.

In You Are Next, Lief introduces Karin Schaeffer, a former police detective whose husband and three-year-old daughter were slaughtered by serial killer Martin Price. Scrawled on the wall in her child’s blood were the words “You Are Next”. She is left emotionally annihilated and when news reaches her that Price has escaped from prison, she plans to sit and wait for him to end her pain. However, even behind prison walls, Price has a long reach and places Karin’s family in danger. She and her former partner Mac work to shed light on the secrets of Price’s past and the key to finding Karin’s kidnapped niece before she becomes the Domino Killer’s next victim.

In Next Time You See Me, Karin and Mac are now married and live in New York with their son, Ben. After an awkward promotion at Mac’s security firm, the new family is devastated by the double murder of Mac’s parents and the implications that Mac’s brother may have been involved. Then Mac disappears and is assumed dead—until Karin thinks she spies him in Miami and works to uncover the truth behind her stalwart husband’s disappearance. 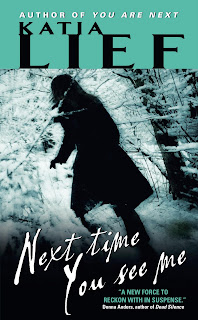 oth of these books have lean, twist-heavy plots that offer a fair amount of suspense. The strength of both is Lief’s ability to get into the emotional space of her main character. Karin’s emotional fragility in the first book makes her an extremely interesting protagonist. In Next Time… she seems to have become more grounded, but more reactionary, and thus less compelling.

Also, both novels rely too much on coincidence to build some scenes—this is especially true in the first book where a central chase scene nearly toppled my suspension of disbelief. Further, the second novel has just one too many twists in the end than is necessary. Nevertheless, both novels offer fine suspense and some interesting characterizations for fans of the genre.

Visit http://www.katialief.com. Buy You Are Next and Next Time You See Me today.

Shedrick Pittman-Hassett is a full-time librarian and part-time writer trying to do that the other way around. He has written reviews for Library Journal and has also had two articles published in the award-winning Knights of the Dinner Table magazine. Shedrick currently resides in Denton, Texas ("The Home of Happiness") with his lovely wife and the obligatory demon-spawn cats. When not writing, gaming, or watching cheezy kung-fu flicks, he can be found in a pub enjoying a fine brew.
Posted by Shroud Magazine at 7:17 PM