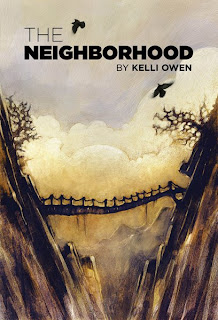 **Premiering at Horrorfind Weekend, 2011, and at Thunderstorm Books, after September 4th, 2011.

Who are the people in your neighborhood?

Not just a fun little song from Sesame Street, but an important question. Especially if you live in one of those small little towns where everyone knows everyone else. The kind of town with only one school, church, police department, where parents do triple duty on the school, church and Town Boards. The kind of place where everyone has heard every little thing about everyone else. Where the men all meet at the general hardware store to shoot the bull, and the women meet twice a month for their bridge or book or wine of the month club. Where there are no secrets...


Except the ones everyone willfully turns a blind eye towards, and keeps from themselves.

Thus forms the basis of Kelli Owen's creepy new novella The Neighborhood, out from Thunderstorm Books, September 2nd. In perhaps her most understated, restrained work yet, Owen builds her story and its suspense slowly, brick by brick, using even, smooth brushstrokes to paint a chilling portrait of a small little town where everyone is happy.

Going about their business. And even though rumors spread like in any small town and everyone seems to know the tick and click of everyone else's social affairs, certain things are not discussed. Some thoughts not entertained. The only shadows here in Neillsville hide in the corners. Ones townspeople are too willing to shy away from and ignore. Until the blood comes spilling out into their lives. But even then, the adults “circle their wagons.”

Keep their own counsel. Don't talk to the kids. And by all means, don't LISTEN to the kids, when they tell strange tales too fantastic and dreadful to be true. Because they're only kids, after all. With wild imaginations too prone to carry them away. This is Neillsville, where everyone takes care of their own. And minds their own, too.

So. Who are the people in your neighborhood? Do you know them?

Really? Because Kelli Owen's The Neighborhood may very well cause you to doubt what you think you know...

Posted by Shroud Magazine at 7:20 AM