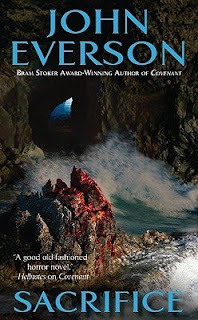 Bram Stoker Award Winner John Everson has followed up “Covenant” with a tale that's just as riveting. Everson spins a great story, and it's impossible to escape the whirlwind. Filled to the brim with sex, violence, and – well – sex with violence, “Sacrifice” is a guilty pleasure, the kind of novel we're all afraid our parents will discover we've been reading late at night, under the covers with the flashlight on.

Since reporter Joe Kiernan outmaneuvered the sadistic demon Malachi by binding him, the small town of Terrell has been quiet. Freed from a pact Malachi held over the townspeople for centuries, Terrel's Peak has become nothing more than what it is: the ruins of an old lighthouse, and an underground geode full of sparkling – and harmless – crystals. Joe Kienan, however, is hardly the swaggering hero. Chained to a sarcastic – and untrustworthy – demonic servant, Joe is forced to leave loved ones behind in Terrel as he travels to parts unknown to determine his future.

All is not well, however. Centuries ago, lighthouse keeper Broderick Terrel made his original pact with Malachi to defeat a race of sadistic and bloodthirsty demons known as the Curburide. The Curburide are back, and this time they have a Caller – a mysterious, sensuous young woman leaving a trail of mutilated bodies in her wake. If she completes her Calling, the Curburide will be granted full access to the world. They will release every degradation known to man – and many more - as they feed off human flesh and spirit.

Standing in their way is a reluctant Joe Kienan, who once again finds himself in the midst of a supernatural maelstrom. He's not alone; thanks to Malachi's manipulations, he's joined by a young girl named Alex...but can he trust her? Her parents have been brutally murdered, she's wanted for questioning, and she can see spirits, talk to them...even harness their power. Worse, Joe feels himself drawing near to this vulnerable, attractive girl, reminding him all too well of what he left behind in Terrel...a town the Curburide will be drawn to, once more.

Everson is in full form. The action is quick, brutal, and visceral. In many ways, “Sacrifice” is like that “slasher flick” we know we shouldn't enjoy but do anyway. The attraction here, however, is his ability to draw complicated, conflicted characters. Joe Kienan is the epitome of the “weary hero”, saddled with a responsibility he neither asked for, nor wants. Alex is a young girl coming to grips with who she really is, trying to recover from years of abuse at the hands of fanatical parents. Even Malachi gets the makeover treatment, so that readers suspect by the novel's end there's more to this demon than it's sadistic whims and brittle sarcasm. Anyway you slice it, “Sacrifice” is a horror novel with hidden depths.

Posted by Shroud Magazine at 6:46 PM No comments: 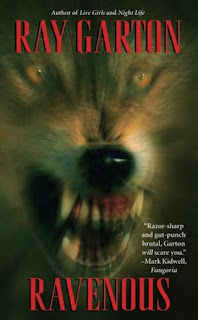 Sheriff Arlin Hurely suffers from problems common to every small town sheriff: unreported domestic abuse, busy-body old ladies, and intrusive local reporters. However, though his department has struggled for several months to capture a serial rapist in their midst, the Californian town of Big Rock is a safe place to live.

That changes when one of Hurely's deputies is killed by a strange animal - partially eaten - while chasing a corpse that unbelievably awakens and flees a hospital morgue in the night. Things quickly spiral out of control, as the incidents of deaths and rape quickly escalates. While the body count piles higher, experts can only determine the animal responsible for the killing is "an unidentifiable species of wolf". When a scarred stranger arrives in Big Rock, claiming they're infested by werewolves, Hurely must put aside his disbelief if he's to save his town and those he loves.

Garton does an excellent job of painting a real town full of real people, falling to an uncontrollable epidemic they're powerless against. Posing the werewolf curse as a sexually transmitted disease works well, though it does offer some sexually graphic moments. Garton's also not afraid to leave readers dangling on the edge at the end, which only wets appetites for the novel's upcoming sequel.

Posted by Shroud Magazine at 3:29 PM No comments: 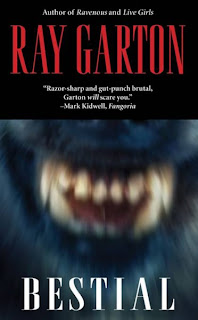 “Bestial” moves at a blistering pace. Where “Ravenous” succeeded by instilling a creeping sense of horror, “Bestial” triumphs in its intrigue as the werewolves spread their influence throughout Big Rock. The humans aren't toothless in this installment, however, as surprise guests from another Garton novel make an appearance. Private investigators Gavin Keoph and Karen Moffet have been hired to investigate the strange events in Big Rock, and they're packing loads of silver.

Since the werewolves' first strike, they've moderated their virulent spread. Slowly, they've worked their way through town, planting their roots. Next up is a large Seventh Day Adventist Church. Through it, the werewolves hope to strengthen their position.

Numerous unexplained “animal attacks” haven't escaped outside notice, however. Successful horror novelist Martin Burgess – always interested in the occult – is convinced something is amiss in Big Rock. He hires Gavin and Karen to investigate. They've been through territory like this before, however, (with an entirely different nocturnal, sub-human species), and they both bear scars from Burgess' miscalculations. Both wonder if Burgess has miscalculated again, and if this time their lives will be the payment.

They're right to wonder. A horrifying change has come to the werewolves. They're evolving, becoming something new. Better. Perfect. All the silver in the world may be useless, and it's very likely that Gavin and Karen's scars may be mere scratches compared to what they'll endure this round.

“Bestial” is a gripping follow-up to “Ravenous”, primarily because it invokes an entirely different set of emotions. That's what makes for a truly successful series: installments that build, rather than rehash themes. “Ravenous” throbs with tragedy as jaded, disconnected, abused and naive townspeople spread the werewolf virus all by themselves. In “Bestial”, there's not only the sense of impending comeuppance, but also the revelation the werewolf virus isn't necessarily the curse it seems. Even though there's more closure here, Garton still leaves trailing threads, hinting at an explosive confrontation in the next installment.

Posted by Shroud Magazine at 3:25 PM No comments: 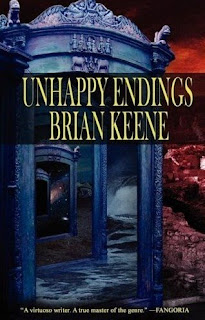 Short story collections are often a mixed bag, and quite truthfully, an acquired taste in some instances. Some readers adore the short form for its crisp, bullet-pace narrative, others are more attuned to longer works – novels, novellas – and a short story's brevity and sometime truncated resolution simply doesn't suit their palate. Collections by established authors can also be viewed askance. Is the collection simply a ploy to lure loyal readers into spending more money, or is it a fresh gathering of new stories from a never-ending wellspring of imagination?

Rest assured, Brian Keene's “Uhappy Endings” (Delirium Books) is the later. There are several winners and shockers here, and even the stories that don't leave as much of an impression aren't detractions from the collection itself. In many ways, that's the value of a collection; it's like a literary buffet. Readers can pick their favorites, and if one story doesn't grab them, they can move to the next.

“Unhappy Endings” opens with nothing less than Keene's staple scenario: the end of the world, and no one does it better than him. On a normal, average day, a supermarket turns into a bloodbath as everyone inexplicably goes insane and massacres each other. Only a handful are left sane. Keene's trademark visceral violence is here, also irony, considering the reason these few are spared madness.

“The Resurrection and the Life” is another grabber, pitting fan favorite – Lord of the Siqquism, Ob – against Christ Himself. Keene's ability to take Biblical lore and turn it into a zombie story is frightening, given his well-established Labyrinth mythos. Not a simple tag-on to his zombie stories, this tale gives more insight into Ob's relation to either deities and the structure of his overall universe.

Ob also makes a more humorous appearance later in the anthology in “The Siqquism Who Stole Christmas”, along with two characters from Keene's collaboration with J. F. Gonzales, “Clickers II”.

Perhaps the two most wrenching stories are “August Bunnies” and “Take the Long Way Home”, for entirely different reasons. In the former, Keene manipulates the story AND our emotions in a tale of loss and grief which slowly turns into something much more sinister. The story builds with a peculiar dread that Keene fans will find wonderfully familiar. “Take the Long Way Home” is Keene's rendition of a post-Christian Rapture Earth, and it succeeds where volumes of Rapture and End of the World stories fail, because it's not about theology or doctrine but a man who desperately wants to get home to his wife, fearing he may have lost his last chance to say: “I love you”.

“Unhappy Endings” may give the reader an impression of futility: that all these stories end badly. That's not true. All these stories end as they should, and it can be aptly argued that if fiction's purpose is to entertain while accurately portraying life, not all stories can end happily. Some of these stories do have “unhappy endings”, but others end with a melancholic resolution that brings closure. Also, in trademark Keene fashion, this collection is refreshingly personal. At the end of every story, notes are included regarding the story's genesis, where they fit into his universe, and of course, bits and pieces of Keene himself. For the devoted Keene fan or a dark fiction fan, experiencing this collection leads to the best ending of all: satisfaction.

Posted by Shroud Magazine at 7:38 AM No comments: 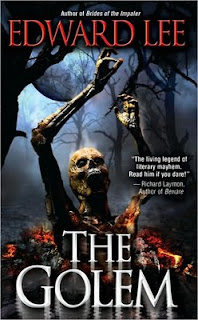 Ancient myths and legends often provide the best material for dark tales. They echo with resonance and history. In his latest, Edward Lee harnesses this resonance with powerful and horrifying results. Under his dreadful ministrations, the golem comes alive and walks the earth. Unlike its legendary predecessor, however, Lee's golem is a dreadful engine of destruction, leaving piles of mutilated bodies and torn lives in its wake.

Seth Kohn and Judy Parker have traveled through hell and come out the other side. Seth has not only recovered from alcoholism but also put to rest the tragedy that caused it: his wife's death. Judy has also defeated her demons; a crack addiction that destroyed her teaching career and reduced her to whoring to support it. Rehabilitated, recovered, and together, the future seems bright. Seth's newest video game dominates the market, and they've just purchased and renovated an old home on the quiet Maryland coast.

Their peace is doomed. Corrupt police and redneck drug dealers run rampant, along with something worse. Informants and rival drug dealers are being killed in horrifying ways, and a dark, ancient evil creeps through the night. Both Seth and Judy will be confronted by their worst nightmares, as the Golem – once a holy instrument of justice – is perverted into a force of evil and malice. Old fears will be resurrected, and Judy in particular will once again become what she's always despised – a “dirty crack whore” - all at the whims of an ancient evil.

“The Golem” evokes all the right emotions: hope, fear, despair, and vengeance. Particularly skillful was Lee's layering of the story, interweaving past and present narratives. For most of the novel, the horror plays out in the past, while dreadful anticipation of it builds in the present. And, as all successful horror novelists do, Lee combines supernatural horror with real, tangible horrors: being haunted by the specter of a dead love and returning to a despised addiction. There's resolution at the end, but also a somber reminder: evil endures, and marches on through history.

Posted by Shroud Magazine at 8:00 AM No comments: