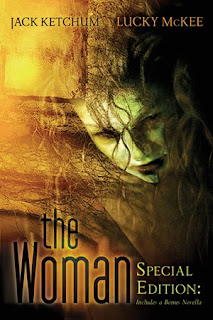 The Woman is the third act of a harrowing tale begun in Jack Ketchum's legendary Offseason, a tale of feral cannibals living in the woods, hunting and breeding and terrorizing the Maine coast. The Woman begins with the last surviving member of this savage clan seeking refuge in cave, resting and healing from wounds inflicted upon her when her clan was attacked and killed by those hunting them.

But this survivor isn't left in peace for long. Because she's spotted by Christopher Cleek, a sophisticated, socially-upstanding lawyer, while he's out hunting. And just the sight of her flips a switch inside. Because though a respected member of the community, the local PTA and Kiwanis Club, Christopher Cleek is something much more. And while that something has been held tightly under wraps, concealed from the public eye, it hungers for release and sees something in this savage woman that whispers of infinite opportunities.

So he captures her.

Brings her home, chains her in his fruit cellar.

To civilize her, of course. And he enlists the aide of his family: wife, teenage son and daughter, his little girl. Because they are well accustomed to acquiescing to his desires. The Cleek household is good at keeping secrets. Has kept them for years.

But the woman is not just a savage cannibal. She is a hunter, skilled in fighting and killing for survival. So she waits.

For the scales to tip, turning prey into predator.

A taut thriller, The Woman isn't for the faint of heart. But the narrative shows admirable restrain for its first half, letting the reader wonder in glimpses what exactly is amiss in the Cleek household (other than the woman chained in their fruit cellar). The dread builds, as it becomes very apparent that Christopher Cleek is far worse than this savage woman he's imprisoned, that dysfunctional family is a kind term for the Cleek household. And when Chris finally slips over the edge, taking his family with him, it is impossible to look away.

Even if you want to.

This special edition also contains a bonus novella entitled "Cow", picking up the The Woman's tale a year later. Without giving away any details, "Cow" makes up for The Woman's early restraint, as nothing is left to the imagination.

Posted by Shroud Magazine at 12:02 PM No comments: