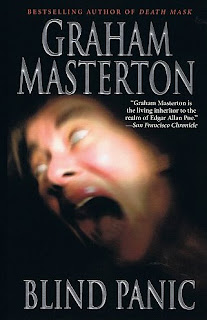 From bestselling veteran Graham Masterton comes an entertaining – if a bit sprawling – apocalyptic tale that once again pits the malevolent, ancient Algonquin medicine man Misquamacus against the hero of Masterton's first novel, (“The Manitou”), the fake psychic, amiable ne'er-do-well Harry Erskine. Though the plot's resolution flirts a bit with dues ex machina, (where an impossible problem is abruptly solved), on the whole “Blind Panic” is obsessively readable and wildly fun, and as usual, Masterton's prose is solid and smooth.

A devastating plague has descended upon the people of the United States: sudden, unexplainable and incurable blindness. The resulting devastation is cataclysmic. Thousands of highway accidents and pileups, dozens of airliners crashing into cities and homes, followed by looting, violence, and fiery destruction. Military bases fall into confusion and disarray, and even the President of the United States falls blind, leaving one of the greatest nations on the planet open to attack from without.

Harry Erskine, fake psychic and good-natured scam artist is pulled into the fray when an old friend, (and would be lover, if life had run differently), Amelia Carlsson calls, desperate because her sister's family has fallen blind, also. Investigating the plague's cause, they discover through bits of testimony that the widespread blindness may have a supernatural cause. A séance summoning an old comrade from the Spirit World confirms their worst fears: Misquamacus, known also as He Who Went and Came Back, has struck against the living once again. He wants vengeance for all Native Americans, and he aims no less than to make modern Americans the next extinct race.

For the most part, Masterton handles multiple third-person narratives and Harry's first person perspective skillfully. Also highly enjoyable are his undeniably Lovecraftian tropes: He Who Went and Came Back, his service to the Great Old Ones, those locked away in time and space, and his medallion depicting the “writhing tentacles of the greatest Old One of them all”. Best of all, the story is very readable and compelling, without any sacrifice to craft or character development, a fun story with substance, also.

Posted by Shroud Magazine at 7:02 AM No comments: 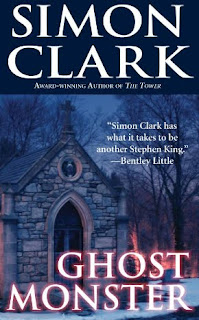 Award winning author Simon Clark is in fine form with his latest from Leisure Fiction, “Ghost Monster”. Though the tale itself isn't wildly original (an evil ancestor imprisoned for his atrocities seeks the freedom to wreak bloody havoc once more ) Clark's prose is a delight to read and his characters are engaging and well written. “Ghost Monster” is proof that “light reading” needn't come at the expense of artful prose.

Centuries ago, Justice Murrain and his band of demented shock troops ruled the small coastal town of Crowdale with an iron fist. The streets ran red with the blood of those he tormented; he took what he pleased, and pleased himself where and with whom he saw fit. Crowdale lay firmly in his grip until his death and supernatural imprisonment beneath the floor of the Murrain mausoleum, enacted by the will of a son he'd neglected to kill after maiming him for life. Since then, the Murrains have lived as outcasts, not only because of Justice Murrain's sins, but also because of their lonely, sworn duty: to watch over and secure their ancestor's imprisonment...forever.

Now, in modern day, coastal erosion endangers the graveyard and the mausoleum under which Justice Murrain's black soul resides. Day by day more of the graveyard falls into the ocean, and even though an archaeological survey team races the clock to find historical artifacts of enough importance warranting government preservation of the land, time is quickly slipping away. That, and two sons of a woman scorned by Jacob Murrain (the eldest living Murrain descendant) nurse a thirst for revenge that will blunder them into doing exactly what Justice Murrain wants most: setting him free to maim and kill again.

“Ghost Monster” is certainly a reworking of often used themes. However, it's well done, a “fun read” with finely crafted prose. Clark's characters are sympathetic and believable, which, combined with his craftsmanship, lifts the novel above it's often-revisited storyline.

Posted by Shroud Magazine at 6:04 PM No comments: 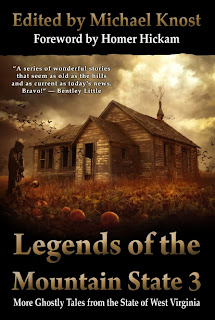 Regional myths and folklore provide the perfect archetypes for tales expressing the collective fears of the human race. Because of this resonance and the unlimited potential provided by oral tradition and the countless ways these stories can evolve, myth, legend, and folklore are among the most powerful forms of storytelling. “Legends of the Mountain State 3”, edited by Michael Knost is the third collection of dark folklore from the state of West Virginia, and it contains tales that embody this timeless storytelling experience. Among the best are:

“The Caretaker”, by Elizabeth Massie, a cleverly written tale about a devotion to purpose that extends past death. “Wampus Cat”, by Scott Nicholson, in which a bitter woman finds her destiny in the darkness of the West Virginian wilds. “Calling the Dead”, by Kelli Dunlap, is about memories that haunt us and never let go, despite all our attempts to outrun them. “Richard Dawson and the Family Feud Phantasms”, by Matt Venne, is perhaps one of funniest celebrity treatments in recent memory, framed by a wonderful, contemporary riff on the legendary Hatfield/McCoy family feud.

The best stories of the collection would have to be Douglas F. Warrick's masterful tale “Her Father's Collection” and “Trapped” by J. G. Faherty. In “Her Father's Collection”, a ghost is bound in a vicious loop by her father's obsession, and in “Trapped” a group of young people make the tragic mistake of visiting the wrong haunted railway tunnel and are consigned to a chilling, doomed fate.

The best aspect of this collection is its brevity. It contains only thirteen tales, all of them three thousand words or less. They remain true to the spirit of the best folktales: short, eerie, with chills that last longer than the stories themselves.

Posted by Shroud Magazine at 7:37 PM No comments: 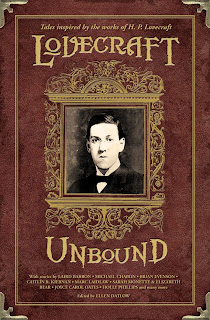 H. P. Lovecraft's work stands as foundational for generations of writers. His continued influence is everywhere: in movies, television, and role-paying games. Search “Lovecraft” on Google or Amazon and be bombarded by free homage websites and numerous collections of his tales, as well as collections featuring contemporary stories inspired by his legacy.

“Lovecraft Unbound”, edited by Ellen Datlow, stands above them all. In a collection boasting the quality one has come to expect from a Datlow-anthology, twenty-two of today's best writers present their visions of Lovecraft, managing to invoke a timeless, nameless dread in new, fresh ways. There's no “weak” story in this collection, but some of the most memorable are:

“The Crevasse”, by Dale Bailey and Nathan Ballingrud, in which a doomed expeditionary team discovers something ominous and unearthly deep beneath the icy Antarctic wastes. “Sincerely, Petrified” by Anna Tambour is a tale in which two academics discover the risks of tampering with the power of myth-making. In “The Din of Celestial Birds” by Brian Evenson, a man stumbles down a mountainside with no memory of what's happened to him, and a strange skin aliment, and the certainty that something inside him is clawing its way to the surface.

“Come Lurk With Me and Be My Love” and “In the Black Mill”, by William Browning Spencer and Michael Chabon, respectively, are absolutely hilarious, tongue-in-cheek pastiches of Lovecraft that are extremely well written; the first about a doomed suitor who meets the “wrong kind of girl”, the second featuring the classic, doomed Lovecraftian scholar whose curiosity outweighs his survival instinct. On the other side of the spectrum, “Houses Under the Sea”, by Caitlin R. Kiernan is a chilling story that invokes all the watery terror that Lovecraft inspired in “Dagon” and Shadows Over Innsmouth”, without ever mentioning either tale.

Finally, among the best are “Sight Unseen” by Joel Lane and “Catching Hell” by Laird Barron, because they feature two “Lovecraftian” deities/beings that don't often see treatment, and the anthology's ending story, “That Of Which We Speak When We Speak of the Unspeakable”, by Nick Mamatas, which manages to inject Lovecraft with a bit of Raymond Carver, or mix Lovecraft into Raymond Carver, whichever describes it best.

Wondering what to get for the shoggoth who has everything? Look no further. Buy it today.

Posted by Shroud Magazine at 6:09 AM No comments: