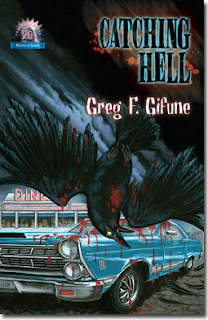 The doomed summer road-trip: perhaps one of the most frequently used vehicles for thrillers and horror movies, novels, and stories. Of course, if offers the perfect set-up: several friends or strangers lost alone on a deserted interstate or back-road miles from urban civilization, far from help.

And really, how many times have we all taken a “wrong turn” and found ourselves in a small, crumbling little hamlet that's off the map and forgotten by time? Even in a world that grows increasingly claustrophobic and connected by technology, plenty of cracks still exist for lonely wanderers to fall through, and this is what gives the premise of “Catching Hell” such chilling plausibility.

It's the summer of 1983 and four friends have embarked on one last joyride before they go their separate ways. All members of a Cape Cod summer theater, they'll soon be starting new lives: one in a prestigious theater school, two off to the city to chase their dreams – however futilely – and one just looking for a good time. This road-trip is one last chance to enjoy their friendship in a carefree way they may never be able to recapture.

At first the community of Boxer Hills seems quaint and antique; a small town that's somehow missed twenty years or so of progress. Soon enough, however, our travelers discover a darkness lingering beneath the surface of this dust-covered town. An insidious, ancient evil holds Boxer Hills in its grip, and only by descending into the depths of depravity and violence do they stand a chance – in hell – of someday escaping.

In regards to plot, “Catching Hell” doesn't necessarily offer many surprises, but it's sound and well constructed. Gifune's prose is the real attraction here; vivid in language and specificity, neat and tight, offering very concrete images with just the right words. He instills a chilling mood and ambiance also, making this the perfect read for a warm summer day...but perhaps when safe at home and not out wandering lonely country roads on a summer vacation.

Posted by Shroud Magazine at 8:40 AM No comments: 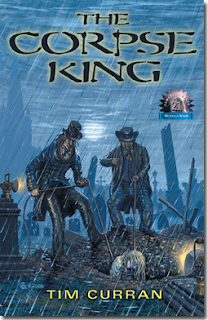 Horror finds its roots in many places: the supernatural, the occult and the bizarre, the common fears of humanity, the lusts and desires of the criminally insane. Often overlooked, however, but perhaps even more potent are the pages of history. We didn't always live in such a sanitized, advanced, progressive world. For all but a few, especially those who lived in crowded urban areas, life was often a miserable, filthy, degrading experience that offered little hope for the future, and in this sewer-bound world very real, tangible horrors, inescapable abounded.

“The Corpse King” by Tim Curran takes place in such a world; a time before modernity, where many made quick profit by sulking through midnight cemeteries and robbing graves of the recently interred. This is the world of Samuel Clow and Mickey Kierney, built on the mouldering dead and their bone-white skeletons. Digging up bodies of the dearly departed, selling them as cadavers, harvesting the dead, these two live a depraved, ruinous life based on charnel house foundations.

Something moves beneath the graves, however, a being whose insatiable taste for the dead rivals theirs. It is far older, comprised of bits and pieces of that which it's feasted on for centuries...and with each venture into wet, night-covered graveyards, Clow and Kierney sense a growing malignancy garnished in the fragrance of decay, coming from something of limitless hunger. It's watching, waiting, biding its time. Despite several close calls, these two graveyard princes continue their plunder – because after all, what other life is there for two low class men such as they? - as they keep a date with the greatest graverobber of them all, The Corpse King.

Posted by Shroud Magazine at 6:53 AM No comments: 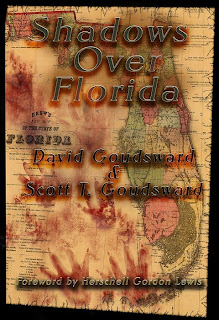 Shadows Over Florida is a thorough and comprehensive non-fictional account of Florida's film- making history and influence. The Goudsward brothers cover practically every fact, detail and nuance since the beginning of the 1900's onward.

Due to racial tensions, religious concerns and epidemics, Hollywood became the place to go to make a blockbuster. This didn't stop films from being made in Florida. From B-movies, grind-house flicks and exploitation films, to episodes of The X-Files, Dexter and Hollywood blockbusters like, The Creature From The Black Lagoon, and Lethal Weapon, Florida has and continues to be the place to shoot on location if you're on a tight budget.

Short stories, novels and the authors that penned them figure prominently and are chronicled as well. From such horror icons such as H.P. Lovecraft, Stephen King, and Douglas Clegg, (just to name just a few) we see the influence this unique state had on their fiction. For instance, the short story, "Cool Air" by, H.P. Lovecraft was inspired by, arguably, America's first air conditioning units which Florida implemented to combat Yellow Fever.

That's just the tip of the iceberg. This book is full of so many facts, incidents, and other fascinating topics that nothing could spoil the read. What makes the book so accessible is how the Goudsward brothers wrote it. Given it's usage of entries as opposed to conventional prose, you can read it straight through or look up favorite haunts thanks to alphabetical listings accompanied by a very keen index.

There's something in here for every fan of film and literature. Shadows Over Florida holds within its pages a flurry of not only critical insights into the film-making process, but also a look into the film-makers and authors alike whom this crazy state has influenced. Being a native Floridian myself, I thought I knew my home-state well. I was wrong and pleasantly surprised. Over and over again.

Posted by Shroud Magazine at 9:46 AM No comments: 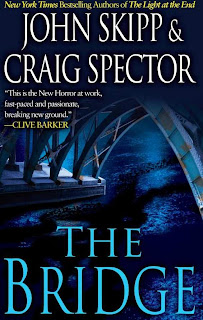 Though reprinted from the eighties, one only has to visit the local landfill or read about catastrophic oil spills in the newspaper to understand the lasting relevance of a novel such as “The Bridge”. Big and ambitious, brimming with a razor-sharp social consciousness and gut-wrenching horror, its resonance proves far more powerful than the average “monster story”. In a world increasingly more reliant on man-made products, its importance cannot be ignored.

In the small industrial town of Paradise, Pennsylvania all seems well, especially for those holding the reins of power. For crooked waste management companies and corrupt officials alike, business is booming. For everyone else, life has capered along as normal. The people go about their business, ignorant of the chemical stews brewing in the depths of Codorus Creek and in other sinkholes secreted throughout the area.

Everything changes on an average “discrete disposal” run during an unseasonal storm. A tremendous clap of thunder, an eldritch flash of lighting, one too many barrels of toxic waste dumped into the simmering waters of Codorus Creek...and something awakens, after long last. A threshold has been breached, a malignant consciousness born, and it is bent on finally lashing out in retribution for a thousand ecological sins. It spreads, infects, consumes and assimilates....remaking the world around it into a twisted, nightmarish vision from which nothing and no one can escape....and it has a message to spread...

To the rest of the world. This is a toxic spill that cannot be covered up, for even the ground itself has joined the cause.

All the “right parts” of a horror novel are here in “The Bridge”, but what separates it from average fare is, as always, the human element. As man's sins rise up in chemical-breathed life to judge and punish, there are no “innocents” who escape. Humanity as a body is measured and found lacking, demonstrating the all too painful reality that abusing the Earth is simply too much like abusing our own bodies, plucking out our eyes to indeed spite our faces. 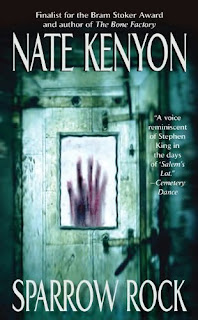 “Sparrow Rock” isn't “The Reach”, and therein lies its brilliance. While the latter crackled with a slow building dread, sported deep characters and offered an almost spiritual resolution, the former pulses with a frantic energy that literally pushes, pulls, even drags the reader through the story at a break-neck pace. This novel, along with recent work featured in the collection “When the Night Comes Down” (Dark Arts), displays a versatility that will allow Kenyon to continue telling stories for a long, long time.

When Pete and his friends decide to hang out and smoke a few joints in a fallout shelter built by Sue Meyer's eccentric grandfather, they expected a lazy day of doing nothing in the company of friends. What they got was the unthinkable: a nuclear holocaust. Trapped miles underground, they're cut off from the world above, with no idea what has happened. Fortunately, they've got food and water and the shelter is powered by an emergency generator. They can survive for some time....

For something has found its way inside, something small, sly, intelligent...and it has a plan. Is it a predator, mutated by the nuclear storm outside, or worse...were they created long before for some horrible purpose? In either case, they soon discover that these things have invaded not only the shelter. Who can be trusted? Who's been infected? Who will survive to the end...who will want to?

“Sparrow Rock” joins “The Reach” and “Prime” as Kenyon's standout works, as well as gives ample evidence of his ability to change-up his game. Also impressive are the subtle, deft plot twists he manages to weave throughout such a fast-paced story. Block a day in your schedule for this. It'll demand a one-sitting read.


Posted by Shroud Magazine at 6:59 AM No comments: