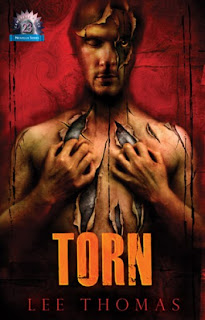 Torn, by award winning author Lee Thomas, is a suspenseful thriller using established horror tropes to give form to our darkest fears.  There's plenty of "horror" action here, but it's strengthened by a wrenching emotional subtext that's perhaps darker than any kind of violence, making Torn everything horror fiction should be.

When a little girl is abducted in the small town of Luther's Bend, Sheriff Bill Cranston prepares for the worst. Horrible thoughts of innocence defiled rise unbidden as he and his deputies and other townspeople search through the surrounding forest to find the missing girl, hopefully before irreparable harm is done to her.

What they find instead is a monster.  A howling thing straight from nightmare.  One of Sheriff Cranston's friends is mauled to death, this thing escapes into the shadows...

And even though young Maggie Mayflower is rescued from the crime scene unharmed, nothing is the same. Because the next day, Douglas Sykes is arrested trying to break into a parked car, naked. Sykes claims to be more than he is, a creature of folklore and legend, of night and shadow.  And not only are there others like him on the way...they want him dead.

And they won't let anything get in their way.

Worse, Sykes is getting into Sheriff Cranston's head. Taunting him. Pulling strings thought deeply buried, strings that tug on secrets.  Secrets that the insane Sykes claims he can smell coming off Sheriff Cranston.  As to why his marriage is crumbling and why his wife Lisa has been descending deeper and deeper into an alcoholic oblivion.

A war is brewing. One, for Luther's Bend.  The other? Sheriff Cranston's very being.  The essence of who he is.

In many was, Torn is a perfect allegory of the "divided self."  Presented to us in the trappings of a classic horror trope, it's not only entertaining, but thought provoking, also.  And disturbing, too.  Because who is more the monster? The one who has accepted who and what they are, the consequences to others be damned? Or the one who hides in the shadows, refusing to come out into the light of day?

Kevin Lucia is a Contributing Editor for Shroud Magazine and a blogger for The Midnight Diner. His short fiction has appeared in several anthologies. He's currently finishing his Creative Writing Masters Degree at Binghamton University, he teaches high school English and lives in Castle Creek, New York with his wife and children. He is the author of Hiram Grange & The Chosen One, Book Four of The Hiram Grange Chronicles, and he's currently working on his first novel. Visit him on the web at www.kevinlucia.com.
Posted by Shroud Magazine at 8:12 AM No comments: 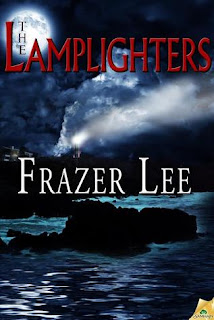 The job seems too good to be true.  Live on a secluded island for a year, maintain swanky, millionaire mansions...and get paid for it.  For Marla Neuborn, a former nanny fallen down hard on her luck, with no prospects left, the job is a godsend.  Especially the way the offer just pops into her email inbox one day.

All she has to do is cook, clean, tend to the mansions, turn on the lights, and pretend that someone is home.  Be a lamplighter, to ward away potential burglars and vandals.  Not only is it the perfect job, but a heaven-sent second chance for Marla, right when she needed it most.  Maybe some of the terms are a bit draconian: she won't know the location of the island, and won't be able to contact the outside world...but she's just desperate enough not to care.

However, it's not long before she discovers something is wrong on Meditrine Island.  The head of island security does more than just run a right ship: he's downright fanatical.  Also, there's no television.  No books or puzzles or even children's books, even.  There are security cameras everywhere. At night, she's convinced she sees a shadowy, haunting figure standing at the edge of the property, looking through the glass...

And he has no eyes.

And when she learns a shocking truth from her fellow Lamplighters, she realizes that her heaven-sent second chance is more like an invitation...to hell.

The Lamplighters, by Frazer Lee, tries to be many things: creeping, eerie horror story.  Serial killer novel.  Enthralling mystery of conspiracy and intrigue.  Supernatural horror. And for awhile, it sustains an admirable amount of tension.  But ultimately, it doesn't quite live up to the expectations it raises.

The story drags in places, sapping tension and suspense.  And while the prose is solid, some of the third person point-of-view exchanges aren't handled well. Certain POV switches read as if they've been made out of convenience, rather than to advance the story forward.  Some writers are masters at hiding plot elements inside limited third-person point of view, but the efforts feel a little too obvious, here.

It is, however, a serviceable novel, and does nothing to diminish the overall quality of Samhain's new Horror Line.  I look forward to Frazer's second offering, if only on the strength of his prose alone.

Kevin Lucia is a Contributing Editor for Shroud Magazine and a blogger for The Midnight Diner. His short fiction has appeared in several anthologies. He's currently finishing his Creative Writing Masters Degree at Binghamton University, he teaches high school English and lives in Castle Creek, New York with his wife and children. He is the author of Hiram Grange & The Chosen One, Book Four of The Hiram Grange Chronicles, and he's currently working on his first novel. Visit him on the web at www.kevinlucia.com.
Posted by Shroud Magazine at 6:04 AM No comments:

Such an ordinary, everyday thing.  Something we often take for granted in today's digitized, electronic society, in which the daily mail is merely one of many ways to communicate, pay bills, arrange clandestine trysts, express sadness or remorse or comfort to loved ones and friends.

Today, a person could conceivably cut the daily mail out of their lives entirely, preferring to communicate largely by email, or pay their bills via phone or the Internet.

But what about a mere twenty-years ago?


A lifetime for those of the youngest generation, but for most of us, a time easily remembered when the mail was perhaps the biggest event of the day.  Especially in small towns, when the mailman was a familiar, comforting cornerstone of small town life.

So imagine a small town in Arizona.  Where the mail has been co-opted by an outsider, a strange-looking man with pale skin, a sick smile, and an eerie knowledge of everyone's fears and secrets.  Imagine how the mail changes, as townspeople receive strange letters from distant relatives and friends either long since passed from their lives...or long since dead, for that matter.  Imagine the threads of paranoia weaving through an isolated town cut-off from the outside world, as the mail itself seems to become a living, breathing, sentient thing.

Knowing everyone's secrets. Pushing their buttons, turning neighbors against each other.  While the new mailman sits in a slowly deteriorating post office, like a spider in its web, playing everyone like personal chess pieces, moving them here and there, back and forth...with the daily mail.

Bentley Little's The Mailman, reprinted in a deluxe, 20th Anniversary Edition by Cemetery Dance, is the best kind of horror: something comforting and familiar, twisted into a dark, shadowed version of itself.  On the outset, the concept may seem a little ridiculous - that an evil mailman could slowly corrupt and take over a town - but it works splendidly, because it plucks an age-old chord: that evil is usually invited. Usually welcomed and allowed to grow strong.


And in this novel, reading a letter is more than just enjoying correspondence: it's invitation. Acceptance.  And once something dark and twisted is allowed entrance into our lives, it burrows and digs deep, refusing to let go without dreadful consequence.

Kevin Lucia is a Contributing Editor for Shroud Magazine and a blogger for The Midnight Diner. His short fiction has appeared in several anthologies. He's currently finishing his Creative Writing Masters Degree at Binghamton University, he teaches high school English and lives in Castle Creek, New York with his wife and children. He is the author of Hiram Grange & The Chosen One, Book Four of The Hiram Grange Chronicles, and he's currently working on his first novel. Visit him on the web at www.kevinlucia.com.
Posted by Shroud Magazine at 10:28 AM No comments: