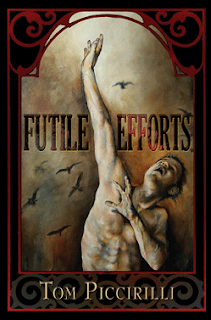 To say the fiction of Tom Piccirilli often defies convention or genre labeling would be a grand understatement. Better to say Piccirilli creates his own literary space, in which inhabits beings of a dark but strangely beautiful grotesqueness, characters that offer readers twisted, warped reflections of themselves.

To look away would be the safe thing, but to stare overlong into these darkened corners would be to tempt our own darkness in a way synonymous with one of Frederick Nietzsche's most popular quotes: 'when long you look into the abyss, the abyss looks into you.' It's fair to say the same can be said of Tom Piccirilli's fiction – that it looks deeply into us, probing the things inside we most want to keep hidden.

The work contained in his upcoming Cemetery Dance collection “Futile Efforts” certainly does that and more. They run the gamut, proving what most already know: that Tom Piccirilli is a skilled and versatile wordsmith: a dark fantasist with the heart of a crime/Noir writer, a sculptor of oddities, and a gifted poet, also. However, for all Piccirilli's strange, melancholic grace, the sharp edge of steel isn't far behind. Among the best stories in the collection:

“Fuckin' Lie Down Already”, a story of a man who won't die – literally – until he has his revenge, a tale that twists heartstrings even as it turns the stomach. “Alchemy”, a terribly disturbing – yet fascinating – tale of what happens when feeling dissolves and apathy reigns among old friends who can't stand the sight of each other or living. “Voice C” plays a switch-up from those caustic stories, weaving a good old fashioned ghost-story haunting.

“Around the Sumac It Still Grows” is a bittersweet, humorous story of trying to find something lost in the days of high school and youth, long ago. “Shadder” twists the 'return of the prodigal son' into something dark, sharp and dangerous. “Thief of Golgotha” blends dark religious fantasy with crime/Noir, and “Two In the Eyes” is a surprisingly touching – and satisfying – story about a brother who avenges his sister's murder. “Jesus Wrestles the Mob to Feed the Homeless” is a masterful blend of crime/Noir, science fiction and humor, while the novella “Jonah Arose” ends the collection in a twisted, dark world of fantastical proportions, a true “carnival of the grotesque”.

Posted by Shroud Magazine at 6:20 PM