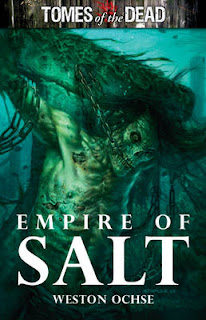 Empire of Salt is Weston Ochse’s latest novel, and as good an introduction to the man’s work as one is likely to find. The story finds eighteen year-old Natasha Oliver, her brother Derrick and their father moving into their new neighborhood. Bombay Beach is on the coast of the Salton Sea, a fairly creepy place in real life, let alone once Ochse gets done with it.

Not only is the Salton Sea a large, stagnant saltwater lake, Bombay Beach is populated by the sort of people one might imagine would be left if everyone with common sense and means just up and left. Not only is Bombay Beach populated by a reformed crackhead with too many kids, a Romanian Elvis-impersonating ex-soldier, and a naked preacher, there’s also a secret, gated installation. And zombies. Don’t forget the zombies.

As Natasha, Derrick and their friend Veronica discover that some of the kooky stories might not be all myth, they rescue a soldier from a group of zombies and, with the help of a few of Bombay Beach’s more colorful characters, attempt to end the clandestine military project behind the zombie outbreak and escape the Salton Sea once and for all.

Empire of Salt’s greatest strength is its engaging cast of supporting characters (a few of the others include the Olivers’ dead grandfather’s two girlfriends an old man with hooks for hands and a thirty-four year old mentally disabled man chained up in his family’s back yard) and retired soldier Ochse’s attention to detail (it’s always nice when authors get Army lingo right).

Another refreshing change of pace is that the book isn’t about a massive, worldwide zombie apocalypse, but a small outbreak that the characters actually have a chance of nipping in the bud. Finally, the Salton Sea is a great setting for a horror story; Google it and see for yourself.

Lincoln Crisler is a United States Army combat veteran and non-commissioned officer and the author of two collections of dark stories, Magick & Misery (2009, Black Bed Sheet) and Despairs & Delights (2008, Arctic Wolf). He lives in Augusta, Georgia with his wife and two of his three children. You can visit his website at www.lincolncrisler.info.
Posted by Shroud Magazine at 3:49 AM