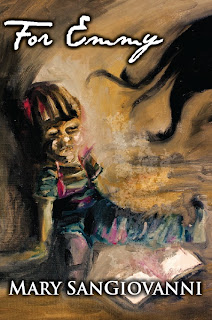 **Premiering at Horrorfind Weekend, 2011, and at Thunderstorm Books, after September 4th, 2011.

"…..I want a reason for babies born with cancer, for the endless supply of thoughtless cruelties both little and large we inflict on one another on an everyday basis, for old folks who are abandoned to die alone and unwanted and unloved.

I want an explanation, please, for all of the soul-sick, broken-hearted people who become so hollowed by their aloneness that they turn on the gas, eat the business end of shotgun, or find a ceiling beam that can take their weight. I want sense made of this. I want to know the reason why...and since none is forthcoming, either from above or those around me, I've decided to try and find an answer on my own. So far, the best - the only - way for me to work toward this is through writing horror stories."

Apologies for the long quote, but it's the first thing that comes to mind after reading Mary Sangiovanni's latest offering, a novella from Thunderstorm Books. Not only is For Emmy chilling, heartbreaking, and quietly terrifying, it works at something behind the scenes, reaching for explanations for the thousands of little tragedies that occur around us every single day, explanations that all too often can never be reached . It's this – and Sangiovanni's flawless prose – that makes her genre fiction more; insightful and chilling commentaries into the human experience, a musing about our possible experiences with something Other than human.

When Dana's McClusky's four year old sister Emmy disappears from her father's bookstore, she does so without a trace. With no evidence of foul play. No ransom note, no clues. For months, Dana and her widower father grapple with their shattered lives, wondering what happened to Emmy, where she's gone, how she got there, and if they'll ever see her again.

Wondering if, perhaps, it would be better not to know.

And then one day Emmy returns. To the same exact spot she disappeared from in her father's bookstore. Disheveled, muddied, slightly wounded and malnourished...and different, somehow. See, not all of Emmy came back. Wherever she went, something happened to her, draining her youth and vitality and spark, leaving behind a traumatized, emotionally-stunted, empty husk. A “not quite Emmy.” And even worse?

The thing that took Emmy away wants more. As usual, Sangiovanni's handle of her prose and story is flawless. And, like precious few other horror writers – Ramsey Campbell comes to mind - she's able to harness the essence of Lovecraftian horror: fear of the unknown, the alien, the unsolvable, and harness it for her own uses, rather than creating homages or pastiches. And this isn't just a spooky, ghostly tale for fun and frights: there's a serious wondering here, about all the unexplained, tragic phenomena that occurs every day, a wondering if perhaps it would be better for us never to know the answers.


Posted by Shroud Magazine at 7:53 PM