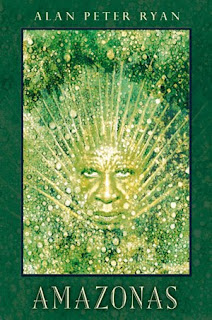 Amazonas, by the late Alan Peter Ryan, reads like a fantastically lucid fever dream. A surreal journey, it works a hallucinatory magic by blurring the lines between reality and horror, taking the reader on a journey deep into the jungles of the Amazon, where the normal rules of civilization and humanity have no meaning. The horror here is all too real: the cruelty of slavery, the lust and hunger of ordinary men driven to fever pitches, the inability of feeble human good to do anything to stop it.

The story is simple: three whites and a group of natives are traveling down the river, deep into the jungle, searching for something called "The Slave Tree". What they find defies all logic and rationale, a figment of some dark fantasy, but dreams of financial success plumbing the slave market with an inexhaustible supply of slaves dies in the ravages of disease, lust for power and violence.

There are no winners in this story, but that is faithful to the world and mood Ryan establishes early in the narrative: this is not world in which anyone can win, because there are no rules to play by.

Even if not an homage to Joseph Conrad's Heart of Darkness, the comparison is inevitable, and not just because of the setting. Ryan invokes that same sense of "slipperiness" and madness without the density of Conrad's prose, and like in Darkness, the jungle is presented as an alien entity, uncaring of human aims or goals.

The Slave Tree itself remains largely unexplained, but this doesn't detract from the tale, simply adds to the story's thrust: most of the natural world is unexplained, much of it dark, and often, humanity just wants to exploit it for mercenary means.

The ending is fast and furious, but again: this feels loyal to the tone of the story, that violence is fast and brutal, and the natural world around it indifferent of the outcome.

Posted by Shroud Magazine at 7:50 AM