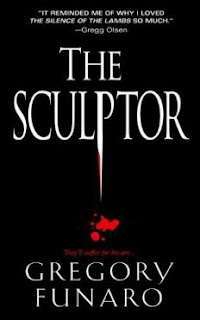 Gregory Funaro's first novel is a polished, page-turning thriller with an emphasis on the Renaissance art of Michelangelo, but with a deliciously perverted twist. Think "Silence of the Lambs" meets "The Da Vinci Code", with a dash of "Red Dragon" and you'll have a pretty good idea of the ride you're about to take.

The titular villain is beautifully rendered in blood and darkness with his eyes fixed on what he regards as the profound beauty of his transformational "art"-- in which his victims, at his hands, become representations of Michelangelo's most famous statuary. And he's using Dr. Hildebrant's book about the artist, Slumbering in the Stone, as a sort of guidebook in achieving his ends. The Sculptor even dedicates his first "statue" to her--the initial clue that begins the race to stop him.

FBI agent Sam Markham is somewhat reminiscent of 24's superman Jack Bauer in that he often seems to know even more about Michelangelo than Dr. Hildebrant does. Both Hildebrant and Markham are rendered well, but compared to the Sculptor, seem somewhat two-dimensional at times. What saves them is their wealth of knowledge about Michelangelo, which Funaro has woven into the storyline so deftly that it is positively absorbing.

Slumbering in the Stone is an interesting prop, in that both the villain and the good guys make liberal use of it; the Sculptor for authenticity and Markham and Hildebrant to try to anticipate his next move. The Sculptor is a brilliant, damaged, uber-organized killer with a defined order and reasoning behind everything he does. This is what makes the book so fascinating and so believable. It is genius pitted against genius, which is always a beautiful, rich thing to read. An interesting facet of this is it doesn't seem as if Funaro is making too much up--the book is so loaded with facts that it reads like a novelized version of a true crime case--in the style of Truman Capote's "In Cold Blood".

All in all, a well-written and most satisfying read. The ending is tied up perfectly with no unanswered questions. This book will live on my shelf to be taken down and read again on some, forgive me, dark and stormy night.
Visit www.gregoryfunaro.com. Buy it today.

Carson Buckingham is a writer living in the great American Southwest and she reviews horror/paranormal suspense novels.
Posted by Shroud Magazine at 6:23 AM