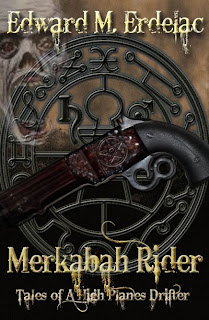 “Tales of a High Planes Drifter” is a collection of four novella-length tales featuring the Merkabah Rider and his adventures in the 19th-century American West. The Rider himself is reminiscent of no one more than Stephen King's Roland of Gilead; a gunman with conviction, who is prepared to kill but still has lines he won't cross. Dropping an Hasidic Jew into the Wild West is a pretty gutsy move, but it just might make this one of the genre's standout books this year.

Not only is the Rider a gunslinger, he's also a potent Qabbalist (one skilled in the secret arts of Hebrew mysticism; seals of Solomon and the like) capable of astral travel and creating magical talismans. He uses his many talents in a series of battles against bigotry, attackers both supernatural and mundane, and his own tortured conscience.

The general thread woven throughout the stories in the book is that of a man, betrayed by his master, seeking justice in the name of his fallen brethren. In the course of the Rider's search for the traitorous Adon he takes on a bloodthirsty cult ("The Blood Libel"), a group of bandits in league with a voodoo bokor ("The Dust Devils"), a demon-possessed, grief-stricken father and husband ("Hell's Hired Gun"), and a cathouse staffed by the daughters of Lilith (“The Nightjar Women”).

Erdelac is a self-proclaimed history enthusiast, and “Tales of a High Planes Drifter” is packed with what must have been a staggering amount of research into Jewish history and mysticism. His descriptive skills are top-notch and he exhibits particular skill at knowing when to throw in a bit of extra gore. The second book comes out this fall, which only adds to the win.

Lincoln Crisler is a United States Army combat veteran and non-commissioned officer and the author of two collections of dark stories, Magick & Misery (2009, Black Bed Sheet) and Despairs & Delights (2008, Arctic Wolf). He lives in Augusta, Georgia with his wife and two of his three children. You can visit his website at www.lincolncrisler.info.

Posted by Shroud Magazine at 9:12 AM