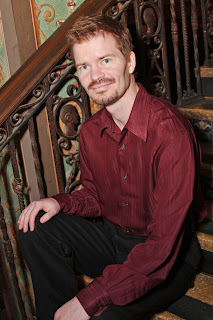 Jeff Strand's latest novel, Dweller, is an incredible tale of a fifty year-long relationship between a lonely man and a lethal forest creature. Like Pressure before it, Dweller isn't a quick burst of thrills and gore; Strand examines our long-term association with darkness and its effects. Instead of a long-winded sermon about a book you really just need to take my word about, I give you the following interview with the author, Jeff Strand:

Lincoln Crisler: I've heard you have something of a reputation as a funny guy and charming personality. What spurred the transformation into the grim, gritty guy that writes about serial murder and man-eating monsters?

Jeff Strand: Well, it seems like more of a transformation than it actually is. The 2009 Leisure paperback edition of Pressure was a reprint of the 2006 Earthling Publications hardcover edition, so though to most readers it looks like I wrote Pressure and Dweller back to back, between those two books was more lighthearted fare: The Sinister Mr. Corpse, Benjamin's Parasite, The Haunted Forest Tour, The Severed Nose, and Disposal. (It's kind of weird to say "lighthearted fare" to describe such splattery books, but compared to Pressure and Dweller it's appropriate!)

The real "transformation" came much earlier. I wanted to write comedy novels, and I'd published three of them: How to Rescue a Dead Princess, Out of Whack, and Elrod McBugle on the Loose, but after my novel Graverobbers Wanted (No Experience Necessary)--which was supposed to be a mystery/comedy but turned out infinitely darker than I'd originally planned--I focused entirely on horror fiction.

JS: Ummmm...I was going to my day job, eating, sleeping, and writing Dweller. That's about it. There were not a lot of outside interests being pursued during the creation of that book. I'd had a very active summer promoting Pressure, and somehow I thought that I'd maintain a regular writing routine during the conventions and bookstore appearances. I was completely insane. So once all of that was over with, it wasn't as if I had to write in a mad blind panic to meet the deadline, but there were some long, long nights...

Dweller is a sad book, dealing with themes of loneliness and an inability to move forward with one's life, but that's not where I was, mentally, when I was writing it. I was tired as hell but happy!

LC: I'm somewhat hung up on routines and schedules, somewhat of a coping mechanism from my childhood with Attention Deficit Disorder. This is of particular import when it comes to my writing. What's your writing routine like?

JS: Despite my best efforts to change my shameful ways, there's really not much of a routine. I'm very deadline-driven, so when a book is due in two months I'm much less productive than when that particular book is due in two days. There's definitely no "I write from 8:00 to 11:30 each night" schedule, or even "I write for two hours a day" or "I write 1000 words a day." I will occasionally try to set up that kind of thing, and it lasts for maybe...I dunno, a day. The books get done, but there's no pattern to it.

LC: I have a couple of other interests that vie with writing for my attention; luckily for my readers writing usually wins. If you weren't writing books, what other talent would you pursue with similar success?

JS: Well, I don't know if I'd be successful at it, but if I was able to pick the career of my choice, I'd do a daily comic strip. That would be awesome. I desperately wanted to be a cartoonist from probably around age 3 to 16, at which point I decided that my drawing skills really weren't up to par. If I'd continued to work at it, you never know--I'm sure I'd never have reached the artistic level of Calvin & Hobbes, but I could've at least produced something comparable to a Dilbert or Pearls Before Swine.

LC: As we've discussed previously, I sensed a pattern in your last two books. Was this intentional?

JS: Yes. Leisure wanted a second book, and they specifically did not want a horror/comedy. So I'd promoted Pressure as my first "serious" novel, and I promoted Dweller as my second. There won't be a third book that I market that way, because I've blurred the lines too much. My next Leisure book, Wolf Hunt, is not a horror/comedy, but it's a fun gory romp with lots of laughs (and yet some brutal and truly nasty moments), so it's sort of in the middle of my spectrum. And then I have a novella called Kutter which is a horror/comedy in premise (a savage, heartless serial killer finds an adopts a Boston Terrier...and it might just make him into a better person!) but has fewer actual "jokes" than anything else I've written--I played it totally straight.

But even Pressure and Dweller are filled with humor. The difference is that I don't combine the funny moments and the scary moments the way I do in something like Casket For Sale (Only Used Once)--it's more about relief of tension and character empathy than to freak out the reader because they're not sure whether the dismemberment scene should make them laugh or wince.

LC: What's next in the chute?

JS: As I type this, Kutter has shipped, so by the time this interview goes up people will probably have received their copies. Wolf Hunt will be in bookstores in December 2010. My novel Sewn (a way over-the-top horror/comedy) will be out from Delirium sometime in 2011. And there's a lot more stuff after that.

JS: Robots. Is it enough to say "robots," or am I supposed to come up with a clever answer? Because I'll do the clever answer thing if you want me to, but you presented this as a simple multiple choice question, so I don't want to do extra work. I will say that if you'd asked me to rank the three in order, it would be 1) robots, 2) pirates, and 3) ninjas. Ironically, that's the exact same order in which you listed them in your question! Could it be that we share the same mindset on this subject?

Thanks for playing, Jeff!

Jeff Strand's books include Pressure, Dweller, Graverobbers Wanted (No Experience Necessary), Benjamin's Parasite, The Severed Nose, and a bunch of other stuff. Cemetery Dance magazine said that "No author working today comes close to Jeff Strand's perfect mixture of comedy and terror," a quote that he vowed to relentlessly milk for the rest of his career. You can visit his Gleefully Macabre website at www.jeffstrand.com.

Lincoln Crisler is a United States Army combat veteran and non-commissioned officer and the author of two collections of dark stories, Magick & Misery (2009, Black Bed Sheet) and Despairs & Delights (2008, Arctic Wolf). He lives in Augusta, Georgia with his wife and two of his three children. You can visit his website at www.lincolncrisler.info.

Posted by Shroud Magazine at 8:56 AM