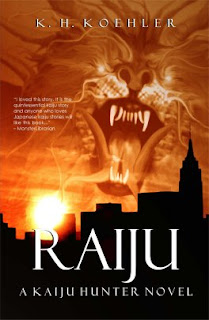 "Tokusatsu" is a Japanese term meaning "special effects," and usually applies to movies featuring giant monsters, robots, superheroes, spaceships, and so on. Aptly, Karen Koehler's Raiju, from Tokusatsu Press, is one of those rarest of animals -- a novel about giant monsters (daikaiju, as they are known in Japanese). Yes, there be monsters here, but the greater part of the book chronicles the day-to-day struggles of Kevin Takahashi, an angst-ridden, Japanese-American teenager whose life issues run a tad deeper than those of your average 21st-Century kid.

After a giant landshark called Karkadon demolishes San Francisco -- in the process killing Kevin's mother -- Kevin and his father move to New York City. Kevin, however, doesn't mesh well with his new environment. The school he attends is populated by more than its fair share of bullies, and most of them consider him an appealing subject for abuse. At least there's Aimi, an exotic and rebellious high-school girl, also Japanese, with whom Kevin immediately falls in love. Complicating matters further, however, is Aimi's father, who runs a mysterious organization evidently related to the genesis of the giant monsters.

Soon enough, a monstrous, centipede-like creature called Qilin attacks New York and destroys much of Kevin's neighborhood. However, no sooner has the critter begun its gleeful smash-fest than an even bigger, dragon-like beast known as Raiju appears and gives its smaller kindred some serious what-for. Much to his shock, Kevin discovers he shares a psychic bond with said beast, and that his destiny and Raiju's are entwined in bizarre, troubling fashion.

One of the biggest obstacles for the literary treatment of daikaiju is that so much of their appeal lies in sheer spectacle: massive explosions, toppling buildings, tooth-and-nail battles between giants; all the things for which Japanese monster movies are best known. Ms. Koehler's treatment of the big critters is appropriately respectful, and the depictions of urban destruction strike a good balance between visual description and emotional narrative from the characters.

That said, the monsters spend most their time in the background, rarely venturing forth. Their origins are rooted in a mythology similar to that realized in Godzilla - Mothra - King Ghidorah: Giant Monsters All-Out Attack, Toho's 2001 re-imagining of Godzilla's own origin, so that the beasts are more than just rampant forces of nature. The revelation of their relationships with the human characters unfolds through a series of dramatic encounters, so there's no sudden info dump about what's really going on.

However, there's only so much overwrought teenage angst a narrative can support, and Raiju pushes it to the limit. To be fair, the novel ostensibly targets young adults, and to this end, Kevin may be just the sort of protagonist with whom Ms. Koehler's readers most relate. More objectively, however, the novel suffers from a significant number of spelling, grammar, and usage errors, which add a needless level of discomfort to the experience. Put it all together, and Raiju is a package that is alternately compelling and a bit taxing. It's not very long, though, so it's a quick read, and the monster parts are definitely fun.

Three out of five mangled skyscrapers.

Stephen Mark Rainey is the author of the novels Dark Shadows: Dreams of the Dark (with Elizabeth Massie, HarperCollins, 1999), Balak (Wildside Books, 2000), The Lebo Coven (Thomson Gale/Five Star Books, 2004), The Nightmare Frontier (Sarob Press, 2006, and in e-book format by Crossroads Press, 2010), and Blue Devil Island (Thomson Gale/Five Star Books, 2007); three short story collections; and over 80 published works of short fiction. Stephen lives in Greensboro, North Carolina, with a passle of Damned housecats, and over the past year have become an avid Damned geocacher. For updates on what's happening currently, visit The Blog Where Horror Dwells and/or the News page.

Posted by Shroud Magazine at 6:49 AM