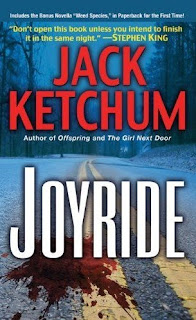 Jack Ketchum is one of those guys whose work is either 100% pure hellfire on wheels or it slumps to the floor with a resounding “meh.” For every world destroying, soul crushing work like The Girl Next Door or “The Box” there is an equally unaffecting work like Hide and Seek or “Megan’s Law”. Those last ones aren’t particularly bad, but they lack the depth and liveliness that make the great stuff so damn brilliant. Unfortunately, Joyride falls on the meh side of the road but “Weed Species”, a presumably tacked-on page-filler, makes up for it in a scant 43 pages full of “Glory Be” and “Hallelujah”.

The blurb on the back makes Joyride out to be a harrowing tale of two people, driven to murder by desperation and fear, who find themselves in over their heads when an absolute psychopath decides that they should all be friends and go for a little drive. However, the story itself comes across more like a standard serial killer yarn with the occasional splash of a police procedural. While this isn’t a problem in and of itself, serial killer stories live and die by the reader’s interest in the killer and Wayne gives us no reason to be interested in him. He’s a one-note psycho who destroys everything around him because… well… because he’s crazy. And that is what crazy people do. The only matter of interest is the escalating extremity of his actions, which reduces the whole experience to little more than the violent pornography Jack’s detractors accuse him of.

Then there is “Weed Species”, the plot of which focuses on the exploits of a de rigueur serial killing and raping waste of air. Nothing special there, but the story stands as a thesis on the spread of evil, like and infection or an invasive weed, choking out all that is good and pure in the world. Peppered throughout this chain of terror and pain are little reminders of the horror that occurs daily as a part of the surrounding world, his way of reminding the readers that nothing occurs in a vacuum. Yet there are also reminders of good in the world (a cat repeatedly going into a burning building to save her kittens and tireless attempts to save lives of those on the receiving end of the violence) and even a spot of hope in one victim’s attempt to stop the cycle within herself. This is the type of story Ketchum has built his reputation upon.

Anton Cancre is one of those rotting, pus-filled thingies on the underside of humanity that your mother always warned you about. He has oozed symbolic word-farms onto the pages of Shroud, Sex and Murder and Horrorbound magazines as well as The Terror at Miskatonic Falls, an upcoming poetry anthology by Shroud Publishing and continues to vomit his oh-so-astute literary opinions, random thoughts and nonsense at antoncancre.blogspot.com. No, he won't babysit you pet shoggoth this weekend. Stop asking.

Posted by Shroud Magazine at 4:07 PM